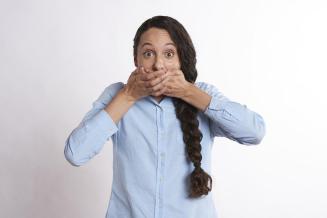 I used to find that my train rides became very comfortable when I started to bring a Bible with me. I’d begin with prayer – presumably looking like I was asleep – and then, suddenly, it would emerge … big, leather-bound, and gilt-edged. I wasn’t trying to show off, but just to use the Bible ‘on the road’ that I also used at home. My seat-neighbours suddenly got up and moved, and new passengers would rather stand, packed like sardines, than sit next to the ‘bible thumper.’ Once, I cheekily rubbed in this seemingly silly avoidance by putting my feet up on the two seats to my right, still holding two free to my left for anyone who wanted to start using them.

To be clear, I certainly did try to share my faith at every opportunity, whether on trains, planes, or buses. Only recently has Apple saved my travel companions from an extended engagement through the invention of their Airpods!

I’d like to think I was respectful, never foisting a discussion or an argument on anyone clearly uninterested, but I’d certainly make some sort of attempt at both normal conversation and genuine interest (which would then continue irrespective of their willingness or otherwise to discuss faith).

It’s not just Airpods that have truncated such friendly chats these days. A growing discomfort among many Christians at engaging on matters of belief, for fear of offending – or of being unable to answer questions – seems to make it all that much easier for many to leave well alone.

I’d offer three simple reasons why any Christian preferring to be an (oxymoronic) ‘silent witness’ can easily strengthen their inner resolve and overcome any apprehension concerning the sharing their faith.

To avoid spontaneous expressions of interest in what truly energises us is actually quite unnatural. I would surely not be true to myself if I was to supress interest in something that matters to me more than anything else.

Once we enter a relational space, the free flow of dialogue on everyday matters easily morphs into progressively deeper exchanges (offering a natural set of off-ramps when needed). The key is to be genuinely interested in people.

If I was to move to a chat about a mutual interest in football, though, would my willingness to do so really be halted by a fear that I might upset a person who hated the game or supported a rival club? Would I back off to avoid an uncomfortable question about coaching tactics, statistics, or rule interpretations outside my knowledge base?

Surely not! So why, then, would I abort any other social interaction with a fellow human about something that is of interest to me until, at the very least, I discovered its level of interest to them?

For some, the real concern is their own relative disinterest in a faith that has become decentralised, if not just minimally practised. Just as some would never venture an opinion on a sport watched only with passing interest, Christianity is also of little importance to those for whom it is not ongoingly transformative.

I didn’t start out sharing my faith fluently. I made mistakes, got tripped up by tough questions, got harassed (even when being respectful), and chastised myself repeatedly for what went wrong …. until more started going right!

People who are today leading or attending churches because I once had a go, followed up, sought answers, and loved unconditionally, all make the seemingly feeble efforts worthwhile. (And we surely don’t give up just because we might get embarrassed or harassed, do we?!)

To live authentically meant that what was good for me possibly had to be for others, too. In the end, accusations by others of bait-and-switch dishonesty or a Bible-bashing insensitivity might just mean that ‘not being one of those people’ becomes a convenient justification for bailing out on the need to be true to yourself.

And today, access to resources, online answers, and courses (Alpha, parenting, marriage, etc.), make the effort straightforward. A relatively new book, “Evangelism in a Sceptical World” by Sam Chan, helpfully addresses the many obstacles we might face in a very accessible and user-friendly manner.

We may not all be vocational evangelists, but every Christian evangelises (as for healing, teaching, prophecy, or any of the many other gifts given to every Christian, and not just a select few – the possibility of specialisation doesn’t absolve us from stepping up).

Ultimately, a conviction to become a Christian (or to realign one’s life to faith) is about adopting belief that is so foundational as to be unlikely to capture someone in just a single conversation.

However, imagine if your part in a chain of conversations was to plant a seed, or even to water one planted by someone else. What if your story of how Jesus changed you at least gave someone something to think about? What could really be lost by giving it a go?

Nothing for you; everything for them.

If the Bible truly asks of everyone that they respond to the offer of eternal salvation in this life, and there are therefore no further opportunities after death, then what should we really do about that?

Would it be acceptable to stand idly by on the side of the road watching someone walk inadvertently into oncoming traffic? Would a half-hearted warning or an overwhelming desire to avoid the offence of shouting or intervening really be acceptable to their family seeking later answers to a subsequent death?

We are seldom persecuted in this nation for engaging in everyday personal interactions, and surely should not be on this score either. Now, the well-meaning insensitivities of aggressive ‘turn-or-burn’-ers might be another (cringeworthy) matter altogether, but don’t we also secretly admire the efforts of those who are at least a little more confident and assertive than we might dare to be?

What is to lose for any of us trying to be – at the very least – the one and only person who may end up changing the eternal destiny of a friend, neighbour, family members, or stranger?

Even if we aren’t ‘allowed’ to (say, at work), we can pray, perhaps even engage at a different time. We often make plenteous excuses and then take very few risks to live as authentically as we sometimes wish we would.

People may well be responsible for their own choices in this life, but some just can’t see the impending traffic accident, so to speak.

Could you consider sharing a believable faith, one that is backed by archaeological support for the Bible, one that offers a thoroughly consistent ethical framework (when properly understood and not misused), and one that has led to millions of changed lives throughout history?

We all start somewhere. Usually that’s with the Bible’s clear call to believe in Christ in our hearts, to profess that belief publicly with our mouths, and to live out the difference in our world with our actions. Better daily connection in prayer and meditation on the Bible sure helps us stay engaged, too.

Dare I say that leaders might also need to ‘plug back in’ if more of their spark is actually coming from football, movies, recreation, (or alcohol). We are all responsible for what we feed on.

That Jesus’ Great Commission to his church starts with the observation that some disciples worshipped him just might be a poignant reminder that a fresh encounter with God can help our hearts to first beat in alignment with His!